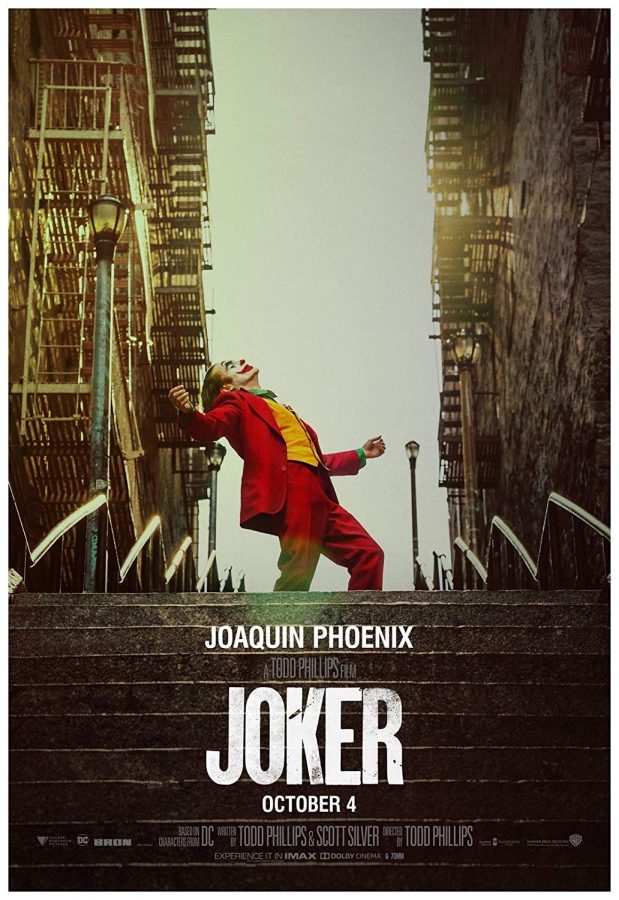 “Joker” is a great film, and a major standout of 2019. The movie was written by Todd Phillips and Scott Silver. It was directed by Phillips, best known for his work in the comedy genre. “Joker” stars Joaquin Phoenix, an experienced actor with his most recent work being the 2013 film “Her.” Acting alongside him are famous names such as Robert De Niro, Zazie Beetz, Frances Conroy, and Brett Cullen.

The official synopsis of the film states: “‘Joker’ centers around an origin of the iconic arch nemesis and is an original, standalone story not seen before on the big screen. Todd Phillips’ exploration of Arthur Fleck (Joaquin Phoenix), a man disregarded by society is not only a gritty character study, but also a broader cautionary tale.” As the synopsis states, Joker is an iconic archenemy of the famous character of Batman. He may have strong ties to this character, but do not expect to see Batman in this story.

While the film does have several allusions and easter eggs to “The Caped Crusader,” it takes place at a time when Bruce Wayne, Batman’s secret identity, is a child. I believe that this is the best decision to service the story as any attempt to include any other major characters would crowd the narrative and take away from the intense character study at the heart of this film. “Joker” makes a point to focus more on the gritty realism of Arthur Fleck and his struggles navigating the underbelly of Gotham, rather than the flamboyant, cartoonish comic book version of the character. After seeing four seperate iterations of the character in cinema in the past, it was nice to see a truly dark take on the character.

“Joker” deals with some very complex topics. The main character, Arthur Fleck, played by Phoenix, deals with various mental health problems, one of which involves uncontrollable laughter. Arthur’s mental health causes almost all people in society to reject and look down upon him. The film explores this and shows the consequences of being rejected because of it.

The film also deals with social unrest in the fictional city of Gotham in the 1980s. There is a large amount of political upheaval in Gotham at the time of this story, and one event, pivotal for the character of Arthur, shifts this tension over the edge. Although this is a fictional city in a past time, the topic of protest and social disagreement is very relevant in our modern world.

“Joker” balances Arthur as a protagonist and an antagonist, which I found impressive. Joaquin Pheonix stated that he sought to portray a character with which audiences could not identify. I think it is incredible that over the course of one scene in this movie, we stop feeling sorry for Arthur and start feeling sorry for the people that get in his way. Following his character so closely, we manage to feel for his struggle and to somehow sympathize with him, even after he does some horrible things.  In the climax of the film, Arthur fully descends into the Joker persona, taking the lead to push the city even farther into chaos. Comic book fans along with general audiences will both thoroughly enjoy this dark and gritty film.